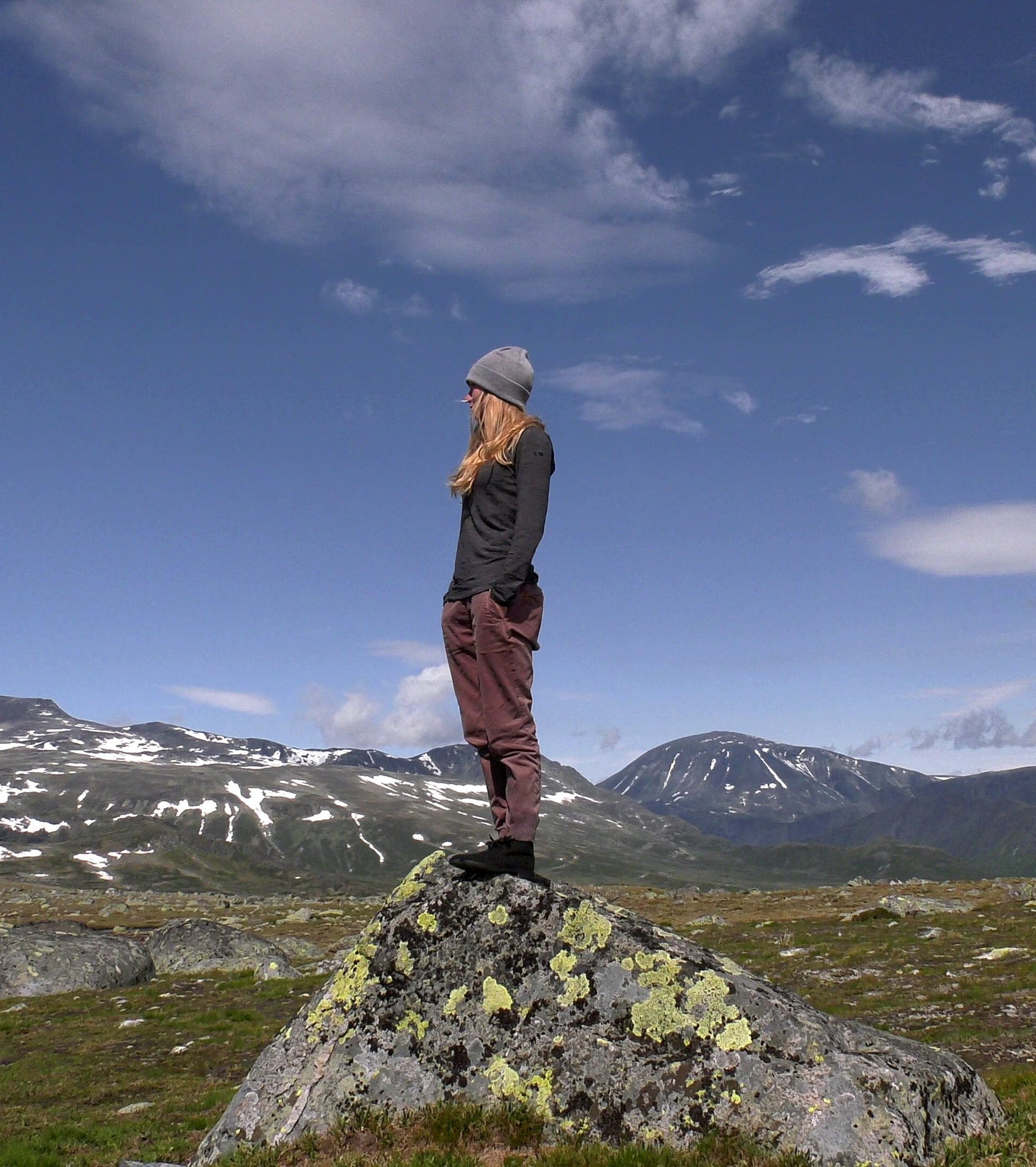 Always keep up to date - Sign up for our newsletter and receive a voucher worth 10,--€! 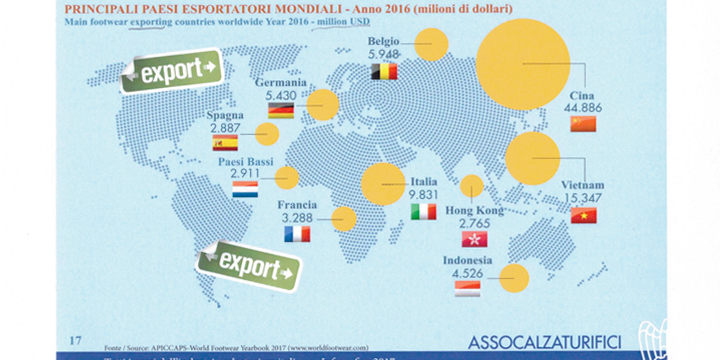 Critical pages on leather processing are hard to find on the web. As we will see, there are vested interests that lead to certain information being silenced or at least well hidden. We found this report from "Change your shoes" from 2016, which analyses the impact of leather production through its interconnection with the meat industry and countless other interesting aspects in a very neutral way.

We would like to report some highly informative passages and warmly advise anyone who wants more in-depth information on the subject to consult the original PDFs "A hard history of leather", "A cow in the shoe", and the 2017 report "The true cost of our shoes", which examines 3 major Italian brands. (These 3 publications are in the Italian language).

We are aware that the figures reported here reflect the reality of a few years ago, but we also know that unfortunately, the trend has not changed - quite the opposite!

Even though it is not current data, we decided to refer to it, since no newer data exhibiting the same level of professionalism was found.

In doing so, we want to do our part to raise awareness of the enormous damage, animal suffering, and social injustices that lie behind every kilo of skin, and to make clear which major interests drive unsuspecting consumers in a certain direction. With this knowledge, each of us is free to decide what to support through our purchases.

The path of leather shoes is long and bumpy because it involves many environmental and social problems. The leather, from which the shoes are made, is obtained from the "coat" that covers the body of animals: not animals that live in freedom, but animals raised under human domination. Thus, the journey of a pair of shoes can begin in a Sahel village, a Texas ranch, or a pasture in a patch of forest in the Amazon.

Leather production has annual sales of $50 billion and is closely linked to the meat industry, which in turn has export sales of about $100 billion per year, not including the value of derivatives such as milk or wool.

The tanning industry claims to play a positive role for the environment, as it "disposes" of the meat industry's waste. However, the money that revolves around leather is so massive that it is hard to imagine it is a sector that is dependent on leftovers produced by others. Suffice to say that it is the foundation on which an industrial empire is built, that is strongly linked to luxury, consisting of shoes, handbags, belts, wallets, furniture, and car upholstery, etc. for a total turnover estimated at over a thousand billion dollars a year. Conclusion: without the skin, a world would collapse. (Source: http://www.euroleather.com and http://www.trademap.org)

Leafing through any magazine dedicated to leather, the complaints of tannery owners denouncing the lack of raw materials appear everywhere. It is, therefore, more likely to think of the meat industry and the leather industry as two allies working together to develop the breeding and slaughtering industry. After all, JBS is the largest leather producer in the world, a multinational company of Brazilian origin that specializes in breeding and slaughtering. With 185,000 employees and annual sales of $50 billion, it slaughters 100,000 cattle, 70,000 pigs, and 25,000 lambs daily, from which it simultaneously extracts meat and hides, which it tans in 26 of its own tanneries scattered in various countries around the world, including Brazil, Argentina, China, Germany, Italy, Mexico, South Africa, Vietnam, and Uruguay.

Almost 90% of the raw leather produced worldwide comes from four mammalian species: cattle, sheep, pigs, and goats. However, the largest share comes from cattle, which alone supply two-thirds of the world's production. Therefore, we will limit our attention to the production chain of cowhide.

Figure 1. Production of raw leather by type (in the percentage of total world leather production - 2010). 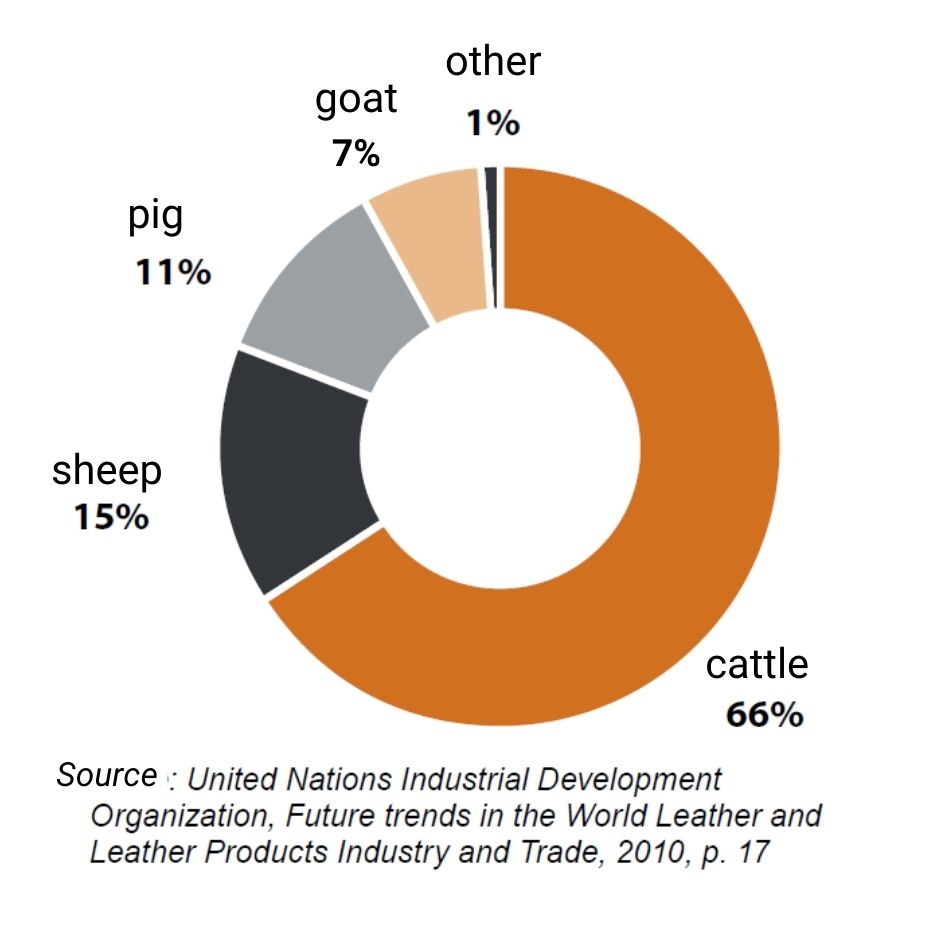 In times of environmental crisis such as we are currently experiencing, animal agriculture is also under attack: for the water it uses, for the food the animals eat, for the land it occupies, and for the waste it produces. It takes 15,000 liters (15 cubic meters) of water to produce one pound of beef. Basically, it takes a small pool of water to make four steaks.

A fact that seems impossible until we examine what an animal eats during its life cycle: 1,300 kilos of grain and 7,200 kilos of other feed. A lot of water is needed to grow all this. It also takes 24 cubic meters of water to quench the animal's thirst and 7 cubic meters to keep it clean.

Conclusion: In order to produce one kilo of beef, 6.5 kilos of grain, 36 kilos of feed, and 15 cubic meters of water are needed. Worldwide, more than 40% of annual cereal production is used to feed livestock. This accounts for nearly 800 million tons of cereals, adding to another 250 million tons of oilseeds, mainly soybeans. In many regions, they are grown as monocultures and exported around the world by powerful multinationals such as Cargill, ADM, and Bunge. In summary, nearly one-third of the world's 14 billion acres of arable land is used to produce feed for animals. If we also take into account the more minor components of animal feed such as straw, fodder beets, and other crops, we would find that three-quarters of the world's arable land is involved in the production of livestock feed in some way. As if that were not enough, even forests are sacrificed at the altar of livestock production. In Brazil, for example, there are 211 million cattle, a number surpassed only by India: The amount of land Brazil needs to raise all these cattle is so huge, producers try to procure them at the expense of the Amazon rainforest. A study by the National Institute for Satellite Research (INPE) found that only 4.9% of deforested land in Brazil is used for agriculture. And while 21% are unused, waiting to see what happens to them, 62.2% are used as pastures. In summary, one can say that the largest rainforest in the world is disappearing in order to raise livestock. The French association Envol Vert estimates that livestock production for meat and leather contributes to 65% of Amazon deforestation: The pastures are mainly located in a fifty-kilometer strip along the main roads that cross the forest. Forests play a very important role in many respects, not least in the fight against climate change, as they can absorb high levels of carbon dioxide. And it is precisely the issue of climate change that places an additional burden on livestock farming, as farm animals contribute to the production of greenhouse gases. To what extent is still under discussion, because not everyone applies the same criteria. Depending on the factors taken into consideration, the share varies between 16 and 32 %. The FAO states that animals contribute 14.5 % to greenhouse gas production, but the calculation only takes into account the gases associated with excrements. If, on the other hand, greenhouse gases associated with grain production were also counted, this share would double.

From farms to rawhide production

The country with the world`s largest cattle population is India, which, however, only appears in fifth place if you go by the meat produced. The country with the largest beef production is the United States, but it is only in third place as an exporting country due to its high domestic consumption. Table 1 shows us a summary of the major countries by beef production, domestic consumption, and exports. It is surprising that India - a country with a Hindu majority, a religion for which the cow is a sacred animal - is the world's largest exporter of beef.

Table 1. Production, domestic consumption, and export of beef and veal in thousand tons (2014). 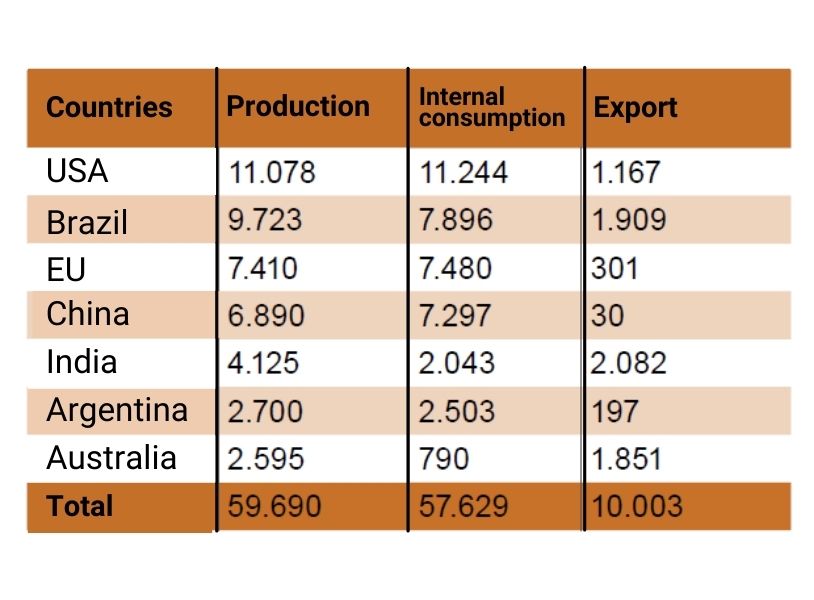 Meat and leather production go hand in hand so that we find an almost identical correspondence in the ranking of leather production with that of meat. In the case of China, there is only a small difference, for reasons that are unfortunately not yet known.

From production to export of raw leather

One would naturally expect to see a coincidence between major producers and major exporters of rawhide. Instead, we find that the second-largest producer, Brazil, contributes only 0.34% of world exports. Other large producers, such as Argentina and India, account for 0.15% and 0.06%, respectively, of the total rawhide traded worldwide. 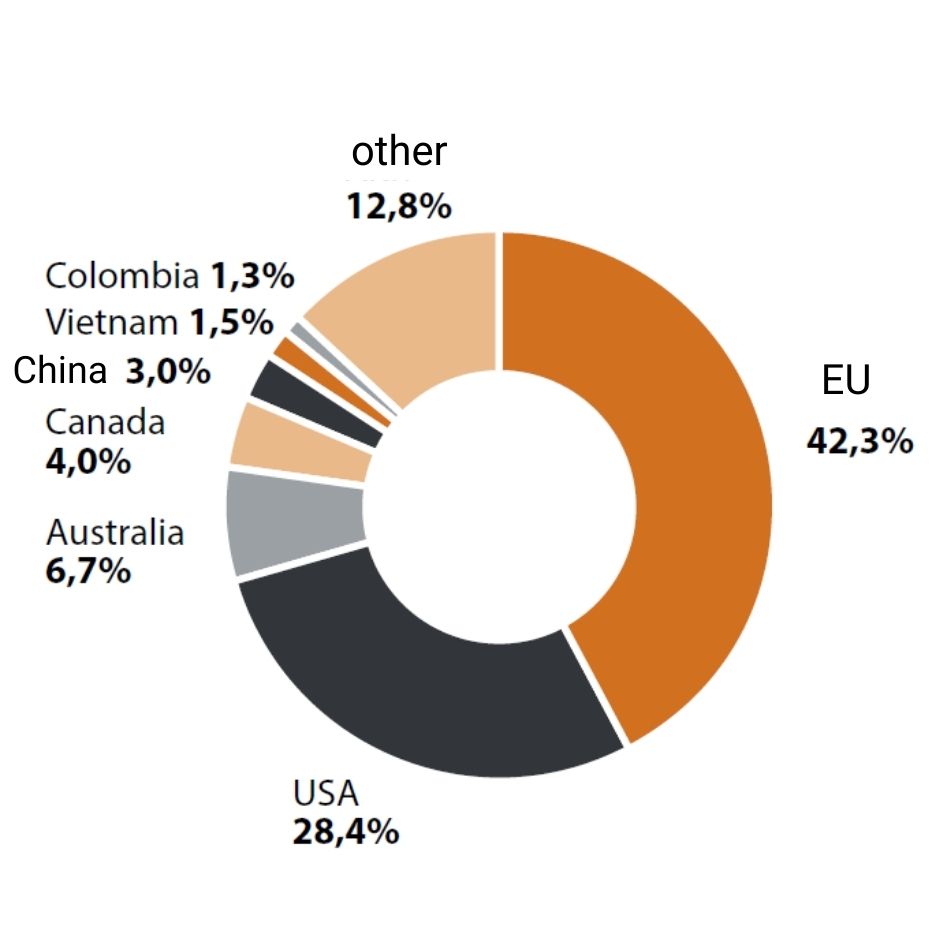 The Italian report continues to analyze the impact on workers, wages, working hours, accidents, and occupational diseases, especially for the district of Santa Croce in Tuscany. It ends with the impact on waste, of which we report only some general aspects.

The tanning industry has a large impact on the environment, not only because of the effects caused by the animals supplying leather but also because of the high consumption of water and the large amount of biological and chemical waste generated during industrial production. From each ton of raw leather, 200 to 250 kg of chrome-tanned leather can be obtained, which in total requires the use of 15 to 50 tons of water, 500 kg of chemicals, and between 9.3 to 42 Giga Joules of energy. Thus, per ton of leather processed, between 60 and 250 tons of polluted water (containing, among others, about 20-30 kg of chromium and 50 kg of sulfide), between 1,800 and 3,650 kg of solid residues, 2,500 kg of sludge, and between 4 and 50 kg of solvents are generated and released into the air. 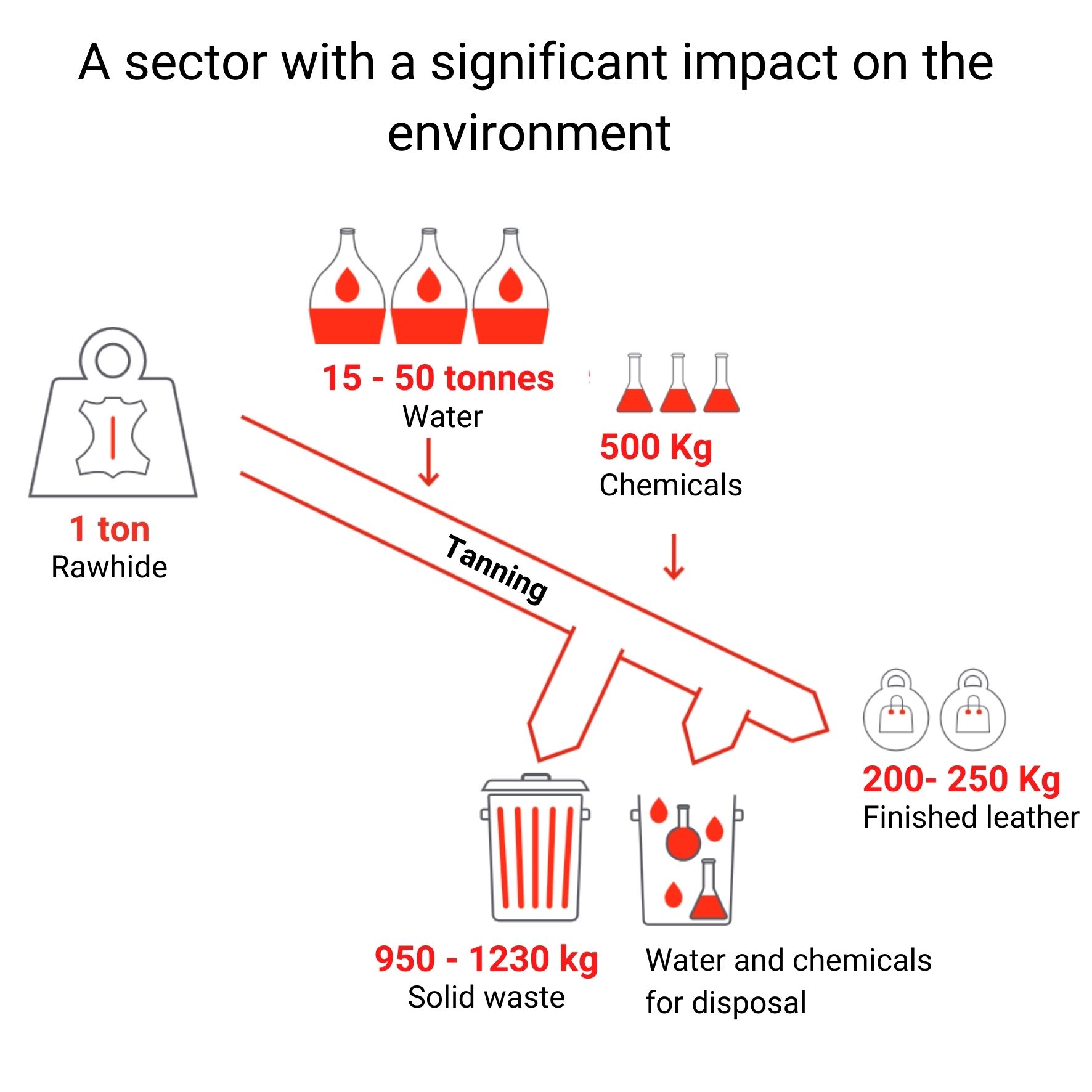 This is where we end. We just wanted to present these graphics and information so that you can get an idea of how big the interests behind the leather and meat industries are. Therefore, you can understand why we chose NOT to use leather in our products. You are welcome to learn more about the full report. 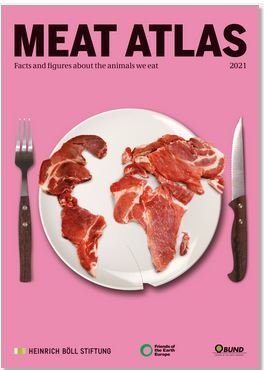 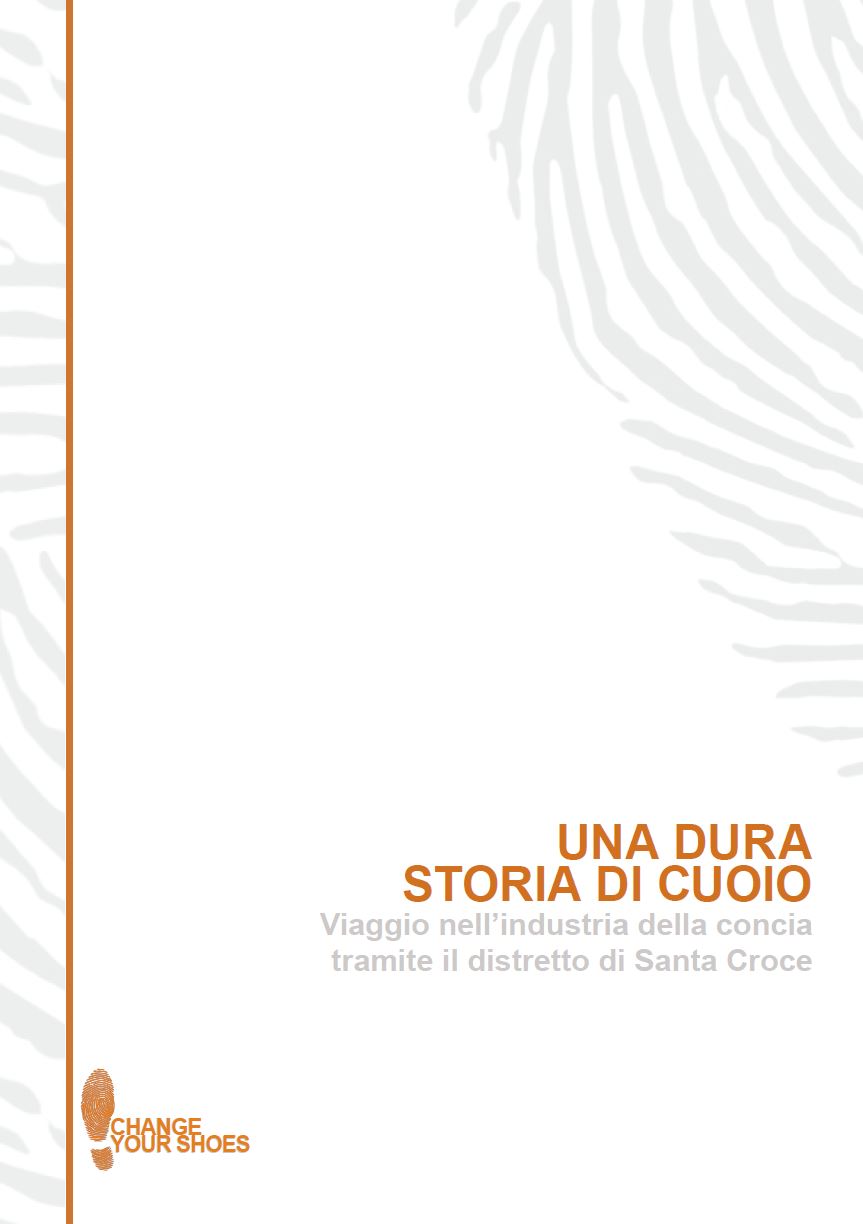 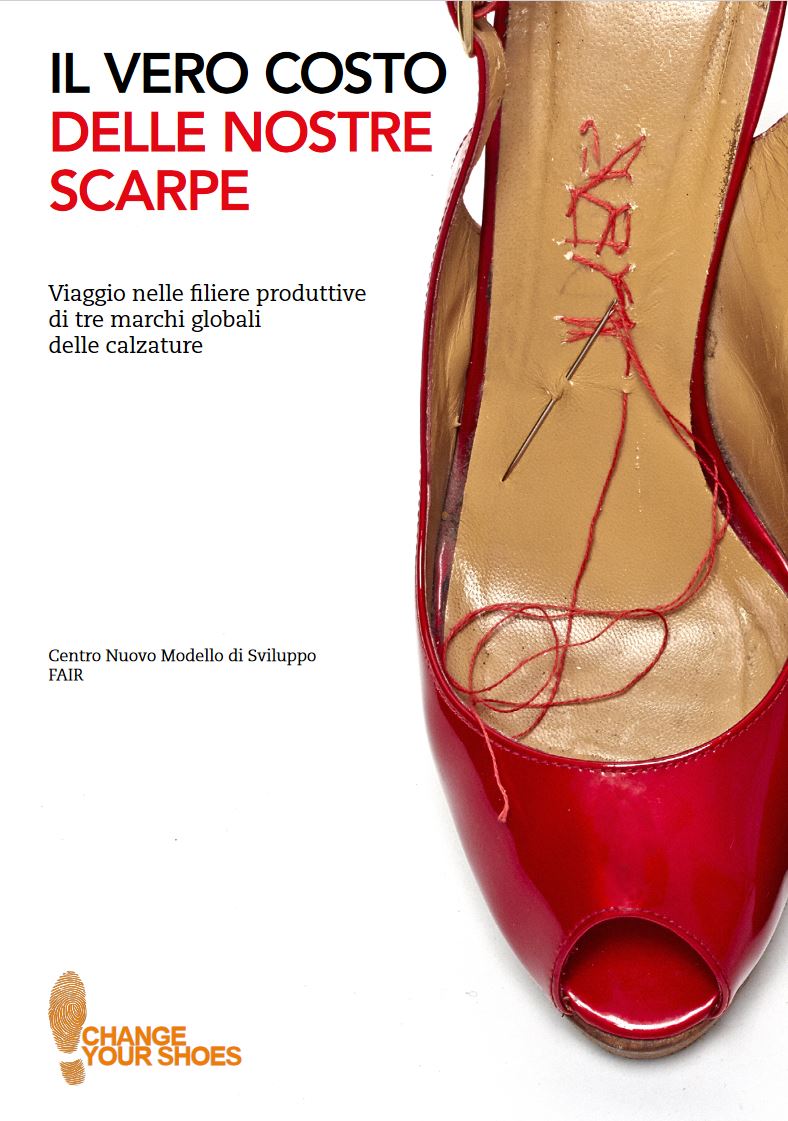 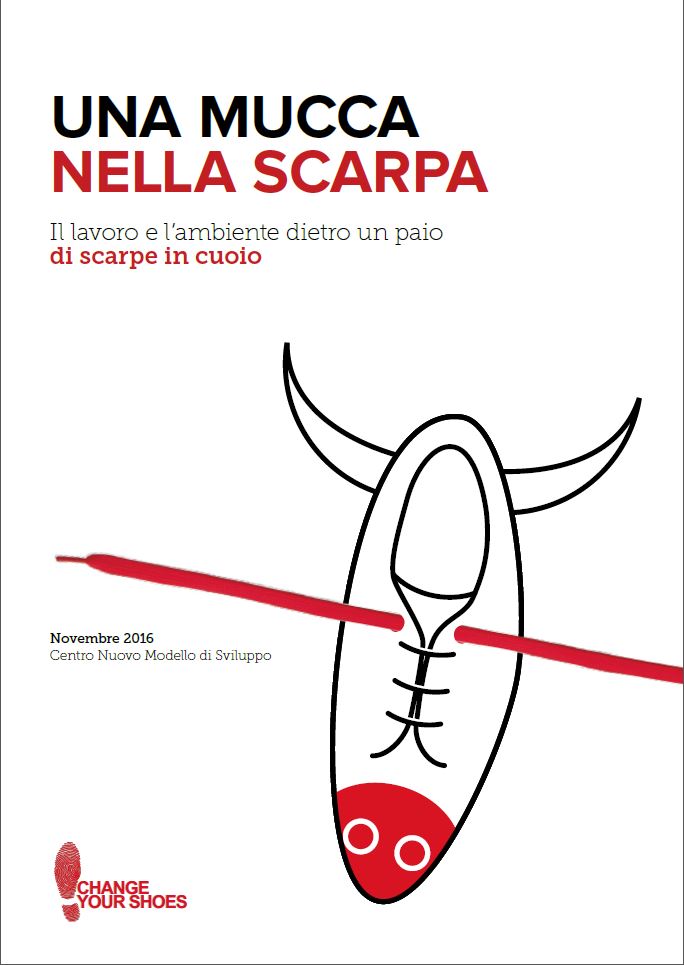